You are here: Home / Disney News / Disney Offers Coupon for 30% Off Select Counter Service Meals Between December 19 and January 1

This was unexpected.  Head over to the Official Disney Parks Blog for your chance to print coupons for 30% off your counter service bill with the purchase of any entree.  The only catch is that you must dine before 12pm or between 3pm and 4:30pm.  As the title states, the coupons are valid from December 19th through January 1st. 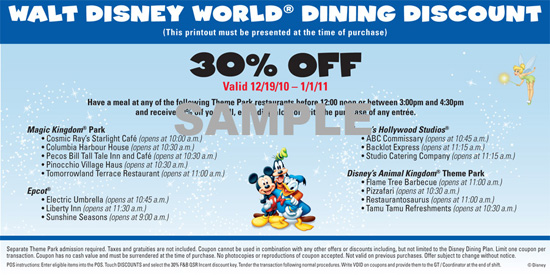 There are a variety of ways to get the coupon:  Go to Official Disney Parks Blog and print out a voucher using the links provided, or  there should be coupons in the Times Guide, at the bottom of select merchandise receipts, or at the bottom of receipts from select resort quick-service restaurants.

Since we’ve been using PDF files the last few days, I have also created a PDF file with two coupons per page so that you can waste less paper and print as many as you want.  It looks like you’ll have to surrender your coupon each time you use it, so it makes sense to print extras just in case coupons aren’t as plentiful at the Parks as Disney is leading on.  Also consider printing some extras to give to people who don’t have any idea this promotion is going on.  It is the holidays after all!

Click here for the printable PDF with two vouchers per page.

It looks like this promotion was somewhat hastily put together considering the poor quality of the coupon image and the fact that they didn’t go through their usual proprietary coupon printer that limits the number of coupons you can print and adds scannable bar codes.

This may be an effort to get locals into the Parks.  Attendance is down during cold spells like Orlando is currently experiencing.