You are here: Home / Blog / Art of Animation Lunch and OH MY GOSH IT’S SO CROWDED HERE!

We’ll pop into Disney’s “art of ANIMATION resort” for lunch and a look around.

Not much had changed since our last visit in September as discussed in this post.  That post also links to the other handful of updates on the resort.

I’m not sure I have anything else to say about it.

With the current promotion, Family Suites are being discounted 15%.  The Little Mermaid standard rooms receive no discount.

With the colors turned up.

Flat out of the camera.

The cone cabanas remain first come, first served.  Surprisingly(?) there were some available around 1pm.

We had some unseasonably high temperatures the last couple of days – 85 on Wednesday and then down to a low of 39 on Thursday.  You know the weather is changing when the recorded high comes at 12:05am.

The Cars characters seemed to be in pretty good shape considering most Disney vacationers are animals.

I had been interested in trying the Mongolian Grill Beef Stir Fry for a while, after being fairly pleased with the Shrimp Tandoori.

What I received was pretty far from excellent.  While the shrimp were grilled up fresh, the Stir Fry is just sitting in a warmer.  While the portion on the monitor was a seemingly large helping served over rice, what I was received was just a few bites.  And by the time I arrived at a table to eat it, the beef and broccoli were warm at best.  The naan remains pretty greasy and the rice didn’t have a lot of flavor.  The side of cauliflower was surprisingly the best thing on the plate.  It’s cooked in a tomato marinara sauce of some sort.  Overall, the meal was below average.  As I think about Art of Animation’s food court, the items do seem to sound a lot better on paper than in “real life.”  I’m not sure if that’s other people’s perception as well.

I was dining avec Christine and Judy, who you may recognize as the forum moderators for the itinerary planning and theme park touring forums.

Christine gave the Buffalo-style Turkey Sandwich pictured above high ratings.  And she tells it how it is, so there’s even less fluff than what you get with me.

Judy opted for the $10.99 Create Your Own Salad, which is one of my favorite choices.  This is pictured without chicken or shrimp, one of which would be included if you so desired.  The Salad and Create Your Own Pasta are basically guaranteed to be delicious.

Kids can also get in on the Create Your Own Salad train for $5.99.  It’s an option for adults who really want a small meal too. 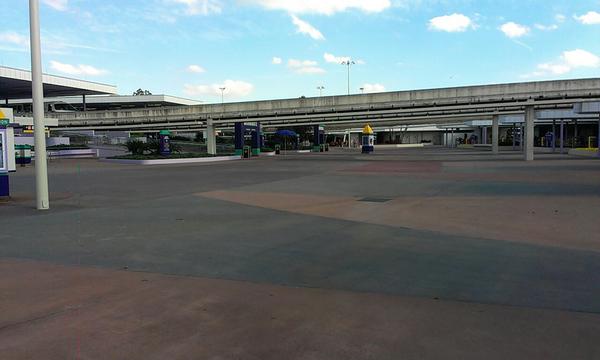 Via The Twitter, this is a picture of the Transportation and Ticket Center around 3:10pm on Wednesday January 30th.  I think there are two people in the frame, but I’m not certain.

To be 100% transparent, I did Photoshop three people out of this picture.  Barring a world tragedy of some sort, this past week should be the second least crowded of the year.  If you have the displeasure of following this website, you’ve probably seen me rant about “crowds” before.  This is the explanation of the overall crowd level you see on the crowd calendar:

And you can view a discussion about how those crowd levels are determined in this (locked lol) thread on the DIS.  Specifically, my response is in post 51, but the whole thread is pretty hilarious.

I’m not sure what else to do about the “crowd calendar.”  If the scale is going to continue being one through ten, then we have to have ones and tens.  And this week is “literally” a one any way you look at it.  There’s a week in September that should see fewer people entering the theme parks, but that’s it.  One important distinction between this website and others is that my crowd calendar only considers crowds from the past 180 days and future 180 days.  So crowds from January 2009, when we were in the midst of a worldwide recession, are of no consequence.  But since we can’t visit in 2009 again, I don’t think that matters.  The purpose of the crowd calendar is really to give you an idea about how crowded Disney World is going to be compared to other weeks when you could potentially visit.

With healthy visitation from South America and more and more schools switching to “weird schedules,” crowds are only getting heavier.  2012 was actually less crowded than 2011 by a little over 2%, but I would expect record crowds in 2013 with the New Fantasyland push and continued discounting.  Walt Disney Company has another quarterly report on the 5th, so we should hear some fresh numbers on resort occupancy and attendance.  This past January was the most crowded ever, mostly due to very heavy crowds spilling over into the first week from December.  Martin Luther King Jr. Weekend was also significantly busier than expected.  Disney was expecting about 25% fewer people to visit than 2012 and ended up getting about 25% more than expected.  When that happens, staffing is too sparse to keep up with the crowds, which only adds to the “feeling” that it’s crowded.

You may have also seen me mention that the difference between a “crowded day” and a “not crowded day” at Magic Kingdom is about 35,000 people in line.

When crowds are extremely low like they are right now, wait times are short because fewer people are in line.  But you still have a similar number of people getting on and off the attractions.

So when Buzz Lightyear has a five minute posted wait at 6pm, you still have the same number of people getting on and off the attraction as when there’s a 60 minute wait.  The difference between a “crowded day” and a “not crowded day” is the longer wait and additional people in line.

This is as light as crowds get though.

A ten minute wait with FASTPASS still 40 minutes out at Space Mountain around 6:30pm.

In late January, Magic Kingdom hours are short and the Electrical Parade is only offered on three nights each week.  That makes days with longer hours and the Parade significantly more crowded.  Telling people, “It’s a low crowd time so it really doesn’t matter where you go” is among the worst advice you can give.  It matters much, much more than in June or July when crowds are much heavier and Park hours and entertainment are more uniform.

Fast forward to July and the difference between a recommended and not recommended day at Magic Kingdom isn’t going to be as significant.  We’re talking peak waits at Big Thunder Mountain of 70 minutes instead of 100 minutes.  Or FASTPASSes at Peter Pan that are three hours out at 7pm instead of gone.  Here in January, they aren’t even operating the second Dumbo.

And there are five people in line for Goofy.

On a non-recommended Monday or Saturday here in January, the crowds would be much higher.

You may remember we visited briefly last Saturday and saw some of the heavier evening crowds.  With both Dumbos operating, the posted wait was 40 minutes.  Space Mountain was at 40 minutes instead of 10 minutes.  It’s really a night and day difference here in January.  Fast forward to July and crowds will still be better on a recommended day, but it’s not as significant of a difference.  If you see, “It was really crowded, but we walked on everything and the longest wait we saw was 40 minutes for Test Track,” you have my permission to punch them.

Be Our Guest continues being booked solid for dinner.  Even with “low crowds” here in January, lunch waits have been a solid 20 to 40 minutes from 10:30am through 2:15pm or so when they close the line.  It’s going to take an hour to eat lunch here pretty much no matter when you get in line.  I had originally recommended getting in line around 10:20am for 10:30am service, but people see the line forming and get in it themselves.  So my advice is instead to get in line after 1pm.  That way, you aren’t wasting time in the morning when waits are shorter.  The problem with that advice is that come May, the temperature is going to be 90 degrees at 1pm.  So there’s that.  There really isn’t a secret best time to get in line for lunch.  And I wouldn’t expect that to change anytime soon.  MyMagic+ may help alleviate some of the wait if people actually order via the app and there’s some way to pay without having to go to one of the ordering kiosks.  Otherwise, it’s going to be years until you can simply walk in and grab a quick sandwich.  It’d be nice if they could add some heartier options to Gaston’s Tavern, but I don’t see that being possible with the limited seating available.  The food at Columbia Harbour House is better if you can go without seeing the inside of Be Our Guest or have dinner reservations.

Journey of the Little Mermaid had a 20 minute posted wait.

But there were so few people in line that they were running empty shell after empty shell.

This is the first time I’ve been on Journey since going on “vacation” in December.

Everything seemed to be working fine.

But I’m not smart enough to notice what isn’t.

Gaston continues to greet guests into the evening – 7pm here.

The crane was scheduled to be on site for another week, but is now gone.

These walls outside Haunted Mansion are new.

Celebrate the Magic is the new-ish Castle projection show that replaced The Magic, The Memories, and Whatever.

It starts 15 minutes before Wishes and lasts about ten minutes.

I like to see the show in the Casey’s Corner area on Main Street.

There’s a PhotoPass photographer that people usually give some space, but he packs up right before Celebrate the Magic starts, creating empty space.  You can see how much empty space there is here about five minutes before the show starts.

The show is absolutely worth seeing.

It’s easiest to see on a night when the Electrical Parade isn’t scheduled.

Walt appears to announce one of his three quotes.  “It was all started by a Mouse.”

Brief fireworks at the end.

We’ll get over to the Polynesian for a look around and dinner at Kona Cafe soon.